A permaculture project to regenerate the lands and livelihoods of two rural communities on the Atlantic coast of Morocco.

The Al Fayda Permaculture Cooperative in Morocco is the first project of UK-based charity, the Fertile Roots Foundation. It involves the two communities of Al Fayda and Azrou Issa, 39 familes scratching a living from 100ha of degraded farmland and from the beach below it.

The wind is almost relentless, the landscape is rocky and what little soil there is lies bare throughout the dry summers, dead and heavily alkaline. To make matters worse, rainfall has been getting less and less and what was a semi-arid landscape 10 years ago is now arid.

Life is very tough and now the government has announced that this stretch of coast lies within one of three new marine reserves where seaweed harvesting will soon become illegal. This means another vital income stream will be lost and there is widespread talk of abandoning the land.

But there is hope, in Permaculture and in the 300ha forested hillside above the arable land. The water and nutrient run-off from this in a heavy rain event is considerable and at the moment it all goes into the ocean.

If we can get this onto and into the land to support the planting of windbreak and nitrogen-fixing trees there is every possibility that this landscape could support these communities on its own. 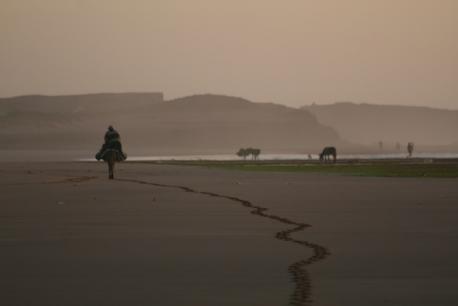